Mozam’beach, Tsetse Flies And A Scorpion In My Pants

African dust for breakfast? Heck to the yes! Test our Anakee tyre on some dirt? We got what we were in for. The rugged, kind of lonely road boasted fantastic scenery tho’: rocky outcrops, koppies and pinnacles rising up sheer from the flat countryside. We had arrived at the southern end of the longest rift system on earth, that stretches for 6400 km, up to the Horn of Africa and Jordan.

Nice bridges even on these dirt roads. Old folks sitting on their palm frond benches flashed their gums as we rode by.

I was rocking the dirt, rocking the gravel, rocking the deep sand and the boulders. It seemed like nothing could stop me, I was Bikatron, carrying our sorry asses from village to village, stopping only to replenish our water supply in the cheer of the kids. The gear lever was my Achilles tendon, hanging loose for some time now, like an overworn pair of undies.

It happened all of a sudden. The gear lever was kaputt. Wouldn’t downshift. I rode a good 30 km stretch in the 4th, but all this involuntary bunny hopping on that trenchy terrain couldn’t possibly have any favorable outcome. We stopped to do something about it in the middle of a village, knowing this would be the friendliest crowd. It’s hard to stomach the fact that more than one in ten people we see in these photos will be dead in five years because of AIDS. Most children get infected while being nursed by HIV positive mothers, receiving at the same time the precious gift of life, and a death sentence.

The bush was steaming. All that could be done was adjust the lever to a somewhat grippier position, which under those riding conditions would mean squat. So until we reached tarmac I kept stopping to hand-gear, then kick it off again. And again.

When camping, the first couple of days without showering have an i-am-one-with-nature feel to them. After the trip in the HippyLand is over, it’s just an itch and bad smell affair all over. In Pemba, we desperately needed a place to shower and rest for a bit. And where were those famous Mozambique beaches anyway? The industrial town lies in the deepest natural bay in Africa and has been recently blessed/ cursed with the discovery of the world’s second largest (if not the number one) gas pocket. There’s offshore drilling and corporate brunching, prices are high and food is scarce.

After checking out the other popular backpackers, we settled for Pemba Bush Camp.

Rudi was born in East London, but he spent his teenage years in Mozambique, where his father had been appointed General Consul. Found a nice piece of land populated by mangroves and baobabs, in a quiet bay in Pemba and started building. A few years ago, he opened a lodge on that piece of land. Lots of freebies to keep one busy there: welcome drink (homemade baobab juice); braai, chairs & lockable chest @ campsite; shared kitchen; wifi (when generator is on, 12 a.m. – 12 p.m.), kayak, archery, nature walks with Rudi’s son, and mud bath. If you can afford it, Rudi cooks great dinners and buffet brunch on sundays. We couldn’t, but, for some reason, Rudi liked us, so he invited us for dinner anyway.

The down-to-earth, chilled staff were our kind of people, so we decided to linger for a few days.

We started our fish hunt in the village of Paquetequete. Every species was there, rotting on ice in wooden trunks. Nothing was fresh.

It was 7.00 in the morning and the sun was already high in the sky. We took the kayak and rowed to a bay where fishermen were pulling their nets. Small-scale artizan fishing communities in Mozambique struggle to eke out a living in remote areas with depleting resources. The fishermen called us to join the group effort. It took over 2 hours and 13 people to pull that out, while two ladies were sieving the shallows for any escapee. After laying the nets, the fishermen divide in two groups that start pulling from the sides. Each person wraps around the hips a cord, that is later attached to a knot on the net cord. Unfortunately these waters have been overfished, and our work in the sun barely yielded a couple of fish. It’s a hard, mostly subsistence existence for these people.

After one day we had our lebanese vendor where we would buy eggs and bread, and even managed to find stalls with fresh fish on Wimbe beach. Then we spotted a boy with a basket covered in shrubs (actually selling prawns). We could finally have our feast. 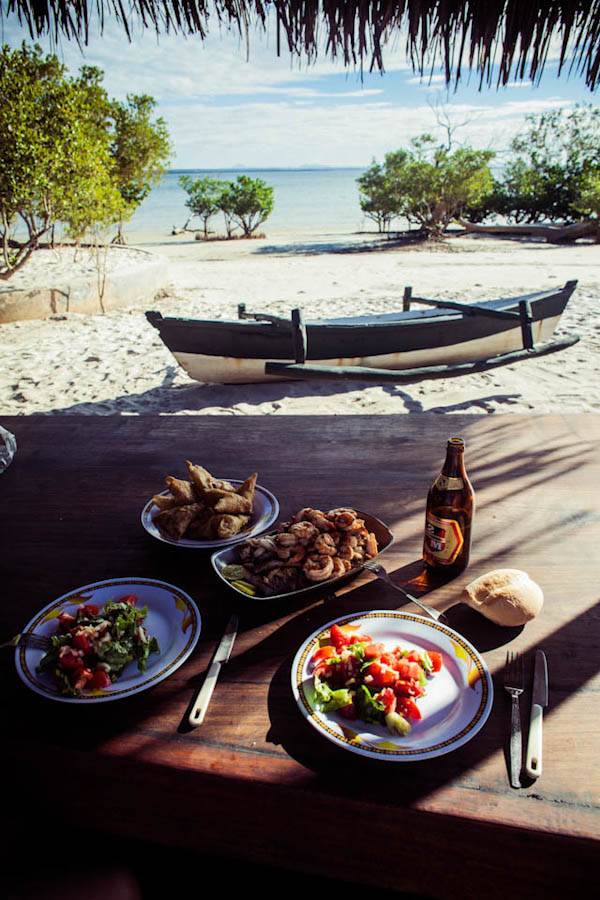 Manica and 2M are competing for the national beer title. I am not the man to discriminate.

Ana didn’t drink Manica, but got hooked on masanica, a wild berry she would pick from around the campsite. It tastes of wild apple, each unique flavor depending on the color, and the tree the berry fell from. Cause you don’t pick these babies from the tree, but off the floor.

We walked among the baobabs and mangroves with Kai-Uwe and Thomas, a backpacking DJ from Vienna

View from inside this 1800 years old giant

Tsetse flies fed on Ana, who took one for the team, and saved my groin, as the scorpio hidden in my riding pants stung her, and not me. Note to self, never leave any gear outdoor again.

To make Ana feel better, Kai-Uwe took us to a sort of natural spa. The main ingredient of the mud is crab poop, rich in sulphur and minerals that exfoliate and soothe skin and hair. It was greet fun.

The corridor between Mozambique and Tanzania is now open, and the expensive ferry can be avoided passing the newly inaugurated Unity Bridge. Immigration & Customs are in Negomano. The morning we were set to take this route, Pemba was hit with the last rain until December. We left at noon, only to find rain on the way, so rode back another 40 km to camp in the dry. Antonio, a farmer who had moved from Nampula to raise cattle, arrived a couple of minutes later to let us know we were about to squat on his land. Wouldn’t we prefer to come to his house, instead? (he offered) We would hang out and get to meet his old lady, he said. Now, who can argue with that?

Our home was pitched in 10 minutes. We learnt that it had taken Antonio 2 days to build theirs.

On one side of their mud hut lay maize fields and on the other the cattle enclosure. Starch on the right, protein on the left. Life couldn’t be much simpler. The hut has two rooms: a kitchen and a bedroom, but Antonio wanted to keep us company, so he pulled out the bed for a night under the stars. Ana laid eggs, tea and biscuits. Francisca cooked rice and fava beans. Faseli, their shepherd, went to the village, to get their best friends, señor Pumbolo and wife, to join us. What a great night!

In the morning we had promised to swing by señor Pumbolo’s house to say bye. Our visit drew a seizable crowd, instantly catapulting Pumbolo as favourite for the next village chief elections.

We spent the rest of the day riding across the stunning Forestry & Hunting Reserve that lines the Niassa National Park. The dirt road has very thick powder dust and heavy trucks had left behind many potholes after the rainy season. It was damp, and wild. We munched on whatever we had find in the last village before the reserve.

We spotted baboons, macaques, birds, blue-assed duiker. It was time to get some rest. There were plenty dead trees lying around. Our machete had cracked in two in Namibia months back. But MacGyver was in the house: I tossed the wood and set it on fire to give a neighborly hint to the lions. Could that be the best bushcamp ever? In our tent we closed our eyes, and enjoyed the kaleidoscopes behind the eyelids.